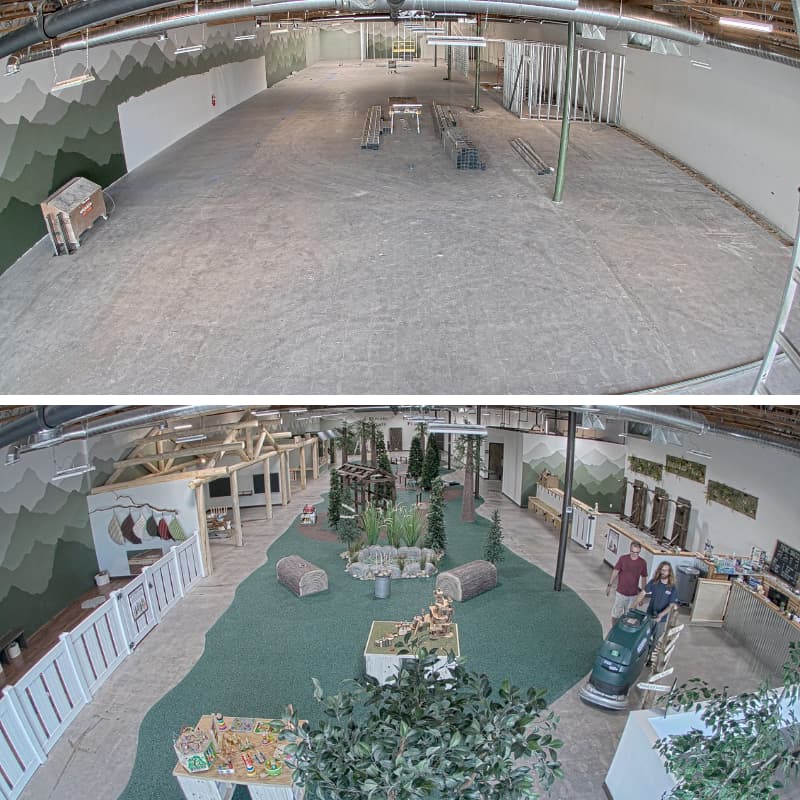 Empire Construction Group of Nampa, Idaho, is a general contractors skilled in a variety of project types ranging from new construction, remodels, disaster repairs, and more.

Todd Harris, owner of Empire Construction Group, is well-known throughout the Treasure Valley for his high-end, decorative concrete work for both commercial and residential construction projects.

“This camera is super easy to use! We can’t wait to install one on our next project.”
- Jon Gormsen, Empire Construction Group

Empire Construction Group (ECG) was hired to build a nature-inspired children's play center in an existing shopping complex in Boise, Idaho. The project would be a complete internal tenant improvement with a variety of specialty design elements incorporated throughout.

Todd and his crew had previously relied on their cell phone cameras to document their projects, but with a project filled with unique challenges ahead they knew a professional-grade solution was needed to document this project.

Todd and ECG needed to find an easy-to-use construction camera for their tenant improvement project that didn’t require additional time or training for his team to learn how to use. An intuitive interface was very important because the team was on a tight deadline.

Additionally, since the project was only slated to take a couple of months, a construction camera rental was ideal because it would be more affordable than purchasing a camera and would help accommodate the project budget.

Finally, since the project was in an existing shopping complex and no exterior construction work was needed, the construction camera and photo documentation solution for Empire Construction Group needed to be geared specifically towards interior construction and have the ability to capture a wide field-of-view to ensure all work was properly documented.

Having no previous experience with construction cameras, Todd and the ECG team spoke with other contractors about their experience with photo documentation solutions to get a better understanding of what was available. In addition to speaking with industry peers, Todd searched Google for time-lapse camera solutions for interior construction projects.

Due to the project being an interior tenant improvement, a construction webcam with a wide-angle lens was needed so it could capture all aspects of work completed at the job site. A 4K construction camera with great image resolution was also desired on the off-chance that an accident would occur and ECG would need photos to refer to.

After speaking with a handful of contractors and searching Google for construction cameras that work well on interior projects, Todd and Empire Construction Group reached out to iBEAM Construction Cameras.

They were immediately impressed by the quality of iBEAM's photos and video, as well as the affordable short-term rental options.

An interactive demo with an iBEAM camera specialist showed Todd the various camera types offered by iBEAM live in action and helped him narrow down his choice.

After reviewing his options, Todd ultimately decided on the iBEAM OnSite Fixed 4K Construction Camera from iBEAM Construction Cameras. The OnSite Fixed 4K camera offered a live video feed (which was important to the owners of the project), as well as the ability to create on-demand time-lapse videos. Those features, coupled with the affordable rental price and wide-angle lens, was enough for Todd and Empire Construction Group to place their order.

Todd and his team at Empire Construction Group couldn’t be happier with their iBEAM OnSite Fixed 4K Construction Camera!

“This camera is so f**king cool! I can’t believe we never used one before now...we’ll definitely be using them more often in the future.”

They were able to provide regular photo and time-lapse video updates to the owners of the project, thus helping to keep ‘lookie-loos’ away from the job site and out of their way.

Accessing the camera via iBEAM's online interface on his smartphone allowed Todd to answer questions his team had regarding project details when he was out of town, helping to reduce wasted down-time at the job site.

“Using the online portal took no extra time to learn how to use, and was as simple as logging into my email account,” Todd reports.

Finally, with the OnSite Fixed 4K camera providing the widest wide-angle view on the market, Todd was able to capture every important detail his team accomplished during the build in Ultra HD resolution. That, coupled with the affordable rental price for the short-term project made Todd a believer in the value of construction cameras, particularly for interior construction projects.

With their first experience using a construction camera now under their belts, Empire Construction Group is looking forward to their next project that calls for a camera.

“If we would have known how easy iBEAM Construction Cameras are to use, we would have ditched the DIY cell phone pictures a long time ago!”